The other night I went to see my friend in a production of Rodgers and Hammerstein’s Oklahoma!, the popular 1943 boot-stomping, skirt-swirling barnyard dance of a musical. It’s a high-energy show with a happy ending, but I did not come away with my heart warmed. In fact, I found myself thinking less about Curly and Laurey’s beautiful morning, and more about the dark subtexts of the musical.

So buckle your seatbelts, folks. We’re in for a wild ride of over-analyzing one of the oldest modern musicals, with a little help from French philosopher Rene Girard!

So what are the dark subtexts in Oklahoma!, you may ask? The first is the obvious fact that where there are white American settlers, there are displaced native populations… especially in Oklahoma, thanks to the Trail of Tears. The show portrays happy settlers singing “We know we belong to the land,” without mentioning whom they took the land from. Another subtext is that of sexuality, which seems to drive most of the characters’ actions throughout the show. Similarly, the way everyone reacts to Jud’s obsession with Laurey (Aunt Eller even tells Laurey to ignore the stalking) is disturbing and resonant in the age of #metoo. All this, coupled with the casual and irresponsible handling of guns by everyone in the show–including someone who is violent and unstable–make the show problematic enough for me to predict that within ten years, this show will be banned from the high school stage. But today I’ll be focusing on a less obviously problematic theme: that of insiders and outsiders in a community. 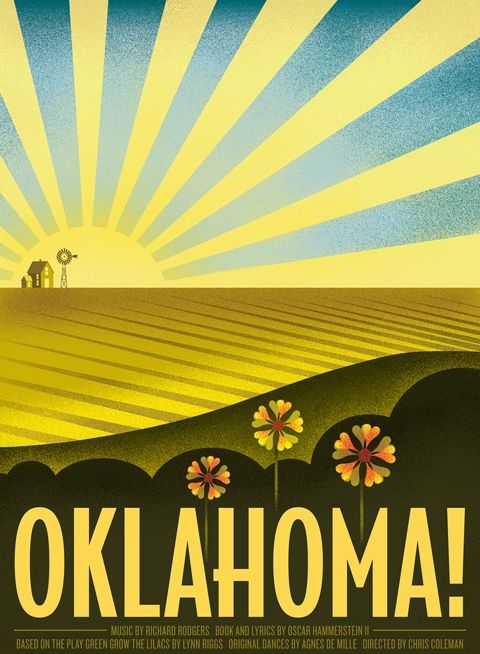 The settlers in Oklahoma! divide themselves into two groups, the farmers and the cowmen. They don’t always get along, despite the profession that “Territory folks should stick together” The song “The Farmer and the Cowman” takes place at a dance, where a few community leaders try to make peace among the two groups. Of course, the farmers and cowmen themselves aren’t altogether on board:

“The farmer should be sociable with the cowboy
If he rides by and ask for food and water.
Don’t treat him like a louse,
Make him welcome in your house–
But be sure that you locked up your wife and daughters!”

The farmers and the cowmen take similar digs at each other throughout the song, and a scuffle even breaks out. What could possibly bring such a divided community together?

So how exactly does a scapegoat reconcile opposing factions? This is where Rene Girard, 20th century philosopher of social science, comes in. He has a whole theory of mimetics, much of which I can’t get my head around, but his basic philosophy is that humans tend to imitate one others’ desires. When two people desire the same object, they compete for it and become rivals, and conflict breaks out. So in the case of the farmers and the cowmen, both want their group to be the more respected. Aunt Eller tries to reconcile them through her saying

I don’t say I’m no better than anybody else
But I’ll be damned if I ain’t just as good!

But there’s another, more effective way to reconcile a community: through what Girard calls the scapegoat mechanism. This is when a person perceived as “different” or “alien” is singled out and sometimes blamed for the conflict, so the community unites against this person. You’ve heard the saying “The enemy of my enemy is my friend?” Think of this as creating an enemy for everyone to hate so everyone can be friends. The insiders gang up on the outsider, and peace is restored, however temporarily. Girard observed scapegoating in Shakespeare and Dostoevsky, and I now apply this concept to a silly Broadway musical. You say I’m ridiculous and irreverent, I say I’m following in an illustrious philosophical tradition.

So who are the most eligible pariahs for the farmers and cowmen to scapegoat? Well,  there are two people that the small community in Oklahoma! regards as outcasts: Ali Hakim and Jud Fry.

I’ve heard the argument that Ali Hakim is an outsider because of his race. However, the first production of Oklahoma! I ever saw portrayed Ali to be a charlatan who pretends to be Persian as a part of his sales pitch, so I take that view of things, both because it’s funnier that way and it makes more sense (how else would a walking caricature of a Persian guy be in Oklahoma even before it got its statehood?). In this view, Ali Hakim chooses to be an outsider, even cultivating a “foreign” persona to enhance his separation from the group.

He wants desperately to belong to the group, but he is shunned by the community nevertheless. Various characters repeat the (vague) reason throughout the show: Jud “ain’t right in the head.” The only time the scenery changes in the entire show is for the scenes in Jud’s smokehouse, first “Poor Jud is Dead” (I can’t bring myself to copy the ridiculous attempt to transcribe an Oklahoma accent) and then “Lonely Room,” which is often cut from the show to save time. Jud exists in a sphere apart from the rest of the community. He’s never in the big company-wide dance numbers. Every time he appears on stage, the ensemble goes quiet and recoils. At the dance when he and Curly get into a bidding war for Laurey’s picnic basket, the entire town gangs up against Jud, cheering when Curly finally gets the highest bid. The message from the staging and acting is clear: Jud is different, and we don’t like him.

And sure enough, Jud becomes the scapegoat. When he goes after Curly at the wedding, Curly stabs him (admittedly in self-defense), and shortly afterwards the company–cowmen and farmers side-by-side–breaks into a reprise “Oh What a Beautiful Morning.” The marriage of Curly, a cowboy, to Laurey, a farmer, bridges the gap between the two factions, but the marriage is secure only when Curly’s rival is scapegoated and killed.

Oklahoma! is a happy show full of song and dance, but with some dark themes lurking under the sunny surface. At the heart of the narrative is a disturbed and disturbing pariah, Jud Fry. The community’s hatred of him brings them together, temporarily quieting the animosity between farmer and cowman.

And what do you think of my analysis? Am I over-thinking things? Is there some justification for using Jud as a scapegoat? Let me know in comments!

Here’s a description of a production of Oklahoma! that doesn’t seek to gloss over the dark themes. I found it helpful in writing this analysis.

2 thoughts on ““The Farmer and the Cowman Should Be Friends”: The Scapegoat Mechanism in “Oklahoma!””